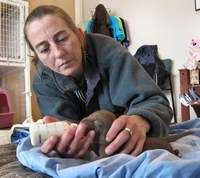 A puppy surprise had the pound in a panic.

The litter of eight black-and-brown newborn Labradors was dropped off last week at the Lucas County Dog Warden's Office. All agreed they were the cutest little things. But they couldn't stay there.

Five-day-old motherless puppies such as these needed bottle-feeding and round-the-clock attention in a calm environment. The county pound once euthanized entire puppy litters for such reasons. If these pups were to live, someone needed to immediately step in and take them.

Fortunately for this litter, Dog Warden Julie Lyle had a new lifesaving tool: a list of area pet rescue groups who had signed on as pound "transfer partners." Phone calls turned up two eager groups.

By Tuesday afternoon, four puppies were en route to You Lucky Dog of Oregon. The remaining litter spent the night with Ms. Lyle and were picked up Wednesday morning by Maumee Valley Save-A-Pet of South Toledo. Staff at both rescues report that the puppies are doing well.

Such experiences underscore the possible benefits of partnerships between the dog warden's office -- a county department -- and private nonprofit rescue groups. The long-term success of ongoing efforts at decreasing unnecessary euthanasia at the pound may hinge on the vibrancy of these relationships with rescues that are able to accept homeless dogs and promote spaying and neutering.

But many rescue groups are small and in a constant struggle for funding and volunteers. "Everybody has limited resources, be it space, time, volunteers, or money, and we all are scrambling for the same limited resources," said Nikki Morey, executive director of Planned Pethood Inc.

Lacking rescue, some adoptable dogs agonize in cages for weeks at the pound until they inevitably lash out in frustration. Such display of aggression will all but doom a pound dog to lethal injection.

In interviews last week with four prominent rescue groups and transfer partners, all said they would like to take more dogs from the pound. Yet some were evasive about revealing the number of dogs they've taken since Ms. Lyle opened the doors this year to all-breed rescues.

"I wish I could be pulling more from Lucas County. That's one of my goals for next year," said Cindy Smith, president of 4 Paws Sake Inc. of Toledo. "We really need to help our local warden."

Lucas County Commissioner Tina Skeldon Wozniak and outgoing Commissioner Ben Konop said they would support exploring the idea of providing a small monetary stipend to local rescue groups from the dog warden's self-supporting budget. Such a stipend could help the groups expand their shelter capacity, network of foster homes, and spay/neuter efforts.

"I find it interesting," Ms. Wozniak said, adding that she would discuss the stipend idea with Ms. Lyle before making a determination. Commissioner Pete Gerken did not return a call seeking comment.

Ms. Lyle built the pound's transfer partner program almost from scratch. The Toledo Area Humane Society has for years taken adoptable dogs from the pound, though it too lacks the resources to give every deserving dog a home.

Former Dog Warden Tom Skeldon refused to work with any all-breed rescues aside from the humane society. He preferred to euthanize his unadopted dogs rather than have groups "come through and shop and cherry-pick" the cutest, he once said.

Rescue groups were baffled. "They were extremely all-breed nonfriendly," Ms. Smith said. "They would work with specific certain-breed organizations, but no all-breed. I never could figure that out."

The Skeldon policy forced Toledo-area rescue groups to form transfer relationships with shelters outside the county. Many of them are reluctant to cut ties with those dog pounds just because they can now pull dogs from Lucas County. As a result, some adoptable dogs languish.

Ms. Lyle said she sent a total 204 prospective applications to rescue groups locally and nationwide. There are currently five groups in the transfer program, Ms. Lyle said, with five others nearing completion of the application process and six more that have shown interest.

She hopes the pound can soon join the PetSmart Charities' Rescue Waggin' program that transports dogs from areas of high overpopulation to shelters where adoptable dogs are in demand.

The prominent Toledo-area rescues are a mix of shelter and foster home-based groups. Planned Pethood and 4 Paws Sake have networks of 40 to 60 pet fosters. Both groups said they would welcome more funding and new foster families.

"We're limited on how many animals we can take in, based on what foster space is available," Ms. Morey said. "If somebody only wants to take 12-pound dogs, then that's all they're going to take. I can't give them a big black Lab."

The Toledo Animal Shelter and Maumee Valley Save-A-Pet operate shelters. Save-A-Pet opened its first permanent facility last year in the former Toledo Ski Club on Hill Avenue near Reynolds Road. The building houses up to 10 dogs and 60 cats in a free-roaming environment where felines and canines coexist.

Many of their dogs were brought in by owners who no longer could care for them, often for economic reasons, shelter manager Lisa McKenzie said. "Some people get foreclosed from their home and they don't know what to do with them," she said.

Save-A-Pet has taken nine dogs from Ms. Lyle since the warden opened the pound to rescue transfers. The group's first pound dog, Darbie, a young male beagle with a fractured leg, arrived in late August, and is now completely healed and awaiting a "forever home."

Ms. McKenzie said that money permitting, her shelter would like to build an addition that could house -- and save -- more dogs and cats.

"Some of them can take a lot of time to be adopted. You just have to find that right person," she said.

For Ms. Morey of Planned Pethood, the long-term solution to finding homes for all homeless pets involves vigorous spaying and neutering.