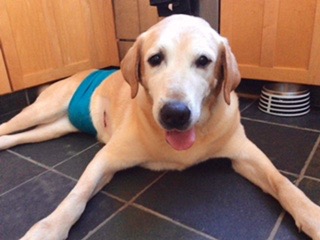 Kane is a gorgeous Yellow Lab mix of about seven years in age. He was found as a stray so we can only guess what his past was like. When I picked Kane up after his neuter, he was scared to get in the car and flattened his 90 lb body on the ground. I tried for about five minutes or so before giving up and seeking assistance from vet staff. Then when we got home, he was scared to go up five steps to get in my house. YIKES! I wondered then what the heck I got myself into. I'm happy to report after a week he goes up and down steps like he's done it his whole life. He also happily gets into the vehicle. Whew! Kane is not completely housebroken but he is getting much better. Knock on wood, he has not had any accidents for almost a week! His biggest issue was leg lifting and I think some of that was due to not being neutered. It's been two weeks since his surgery and I really have noticed less marking. I've been putting a belly band on him to protect my house and he leaves it on...doesn't seem to bother him in the least. The only thing that bothers Kane is being alone. He doesn't even like to be in a room by himself and follows me like it's his job. I'm hoping with some training and time, he'll feel more secure. Kane gets along great with my other three dogs and is friendly to other dogs we see on walks. He also loves people and is very gentle and sweet with children he's met. I don't have a cat but I can't imagine Kane being mean to anyone. He is a gentle giant. Kane is not a barker except when left alone. Again, I'm sure with training and time he'll be comfortable by himself. If you are interested in meeting or adopting Kane, please complete an online application.

Special Notes: Kane has a special adoption fee of $75.

Walks on a leash Yes

Shares Toys With Other Animals: Yes

Eats Nicely With Other Animals: Yes